Milli Vinylli is a free Vinyl simulator plugin developed by Klanglabs. Instruments Effects MIDI Hosts What's new. Not compatible with FL Studio 12. Would love some advice on how to better yourself/networking as a introverted music producer. Especially during COVID-19. I just recently started trying to make more connections for potential collabs and other stuff but it becomes increasingly frustrating to do so when I don’t really enjoy talking to ppl tbh.

Sometimes, you may want to make your beats sound a bit dirty and not so hi-fi and in this tutorial I will show you two methods how to vinylize your beats – in other words, how to add vinyl recording style crackles, pops and hiss to your audio.

Before we begin, I show you quickly how the example beat was put together – in case you’re interested to know.

The drum samples are from the default sample library that comes with FL Studio. You’ll find nice bunch of good quality samples from the subfolders under the Packs folder.

Now in the Mixer, all the Mixer tracks that are assigned to the drum samples are routed to one Mixer track (bus track – note that any Mixer track can act as a bus track in FL Studio). This way, the samples can be effected as a group.

First effect in the bus track effect chain is Maximus. Of course, Maximus isn’t actually essential for the vinyl effect. I’m just using it in this example to fatten the beat and in case you are interested to know how, I’m using a slightly modified version of the “Soundgoodizer A” preset which you can find in the preset menu. How I modified it?

The low end was too heavy so I lowered the Low band pre gain, did the same to High band and boosted the Mid band a little. In the Master band I slightly increased the Attack time to add a little more sharpness to the beat. I also modified the compression knee a bit to make it amplify the lower level input signals. This’ll pump up the beat a little. And finally, I increased the Pre gain few dB’s to give the beat it’s final boost.

The vinylizing in this first method is all about plugins. I’m using iZotope’s Vinyl. It’s a free vinyl simulation plugin which you can download from Izotope’s website.

Compare the difference what it does to audio. First example is iZotope Vinyl disabled then enabled:

Let’s look at some of the controls: ‘Wear’ control’s how worn out the record is. I’ve set it to around 40%. ‘Year’ models record players from different decades using filter responses. I’ve set it to 2000 which has no effect at all (Earlier years roll off frequencies.) There’s also bunch of other parameters which I however didn’t found so usable – at least not in this example beat:

So basically, I’m just applying the Wear and it’s all set.

Ok. Second effect in the chain is a plugin called Milli Vinylli (you can download it for free here). Milli Vinylli is an old Vinyl sound generator. It generates those vinyl crackle, pop and hiss artifacts much of like iZotope’s vinyl, but IMO Milli Vinylli does it better and offers more control over the artifacts.

Let’s look at some of the controls: using the first row buttons you can turn generators on/off. First generator is hiss. Control the volume via the ‘Vol’ knob. ‘Main Vol’ controls the volume of the sum of all generators. ‘Click A’ (and B) generates clicks. ‘Var’ adjusts the level of variation. ‘Density’ sets the noise density and ‘Fq’ frequency. ‘Dust’ generates those same artifacts you hear when you play a dusty vinyl. There’s also ‘Friction’, but I’m not using it in this example beat.

Note that Milli Vinylli generates crackles and hiss continuosly so you might want to record your beat to audio and maybe use it as a loop. Recording is easy: press SHIFT+E in the Master channel to open Edison in loop recording mode and play back your beat.

Use arrow keys to select a record take and drag it to the Playlist using the drag tool. 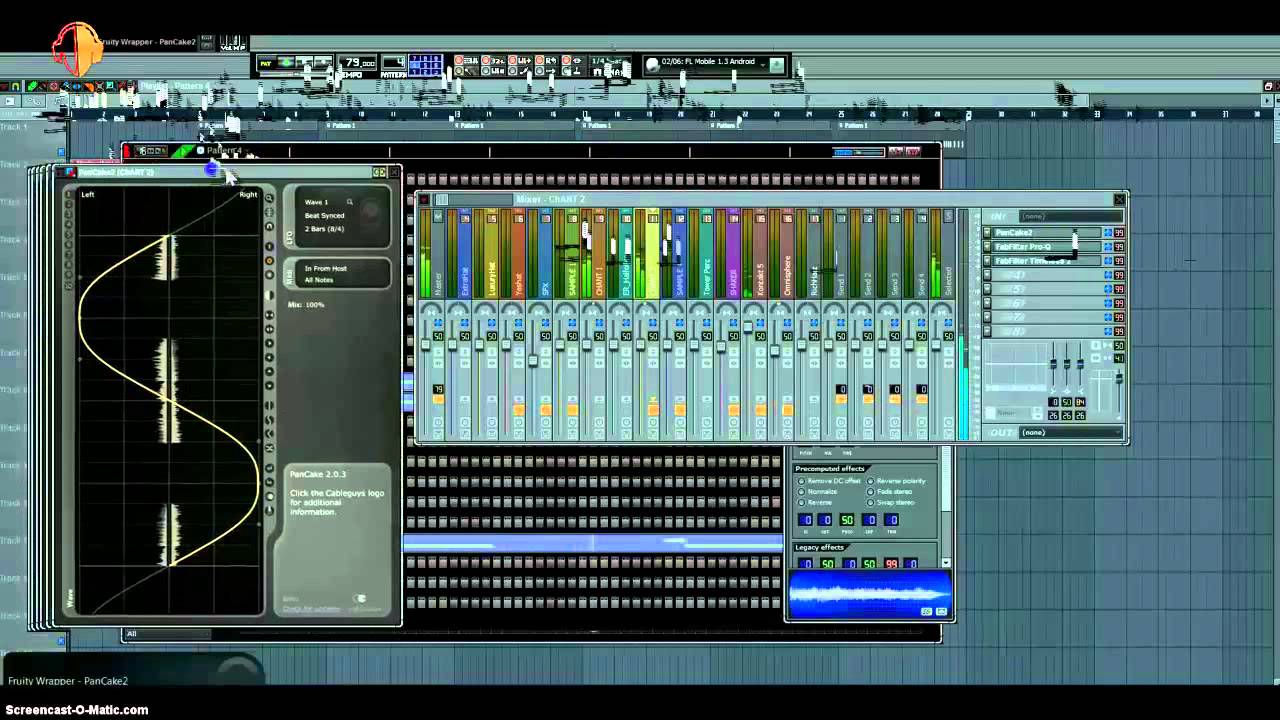 Now disable the effect chain and Edison in the Mixer and you’re all set.

You can also record just the Milli Vinylli crackles to audio and then mix it with the beat.

Ok. This was the end of the first method. Here’s the second method:

In this method, I’m using exactly same plugins in the drum bus track excluding the Milli Vinylli. For the crackle and dust I’m using an audio sample – recorded from a real vinyl. Musicradar’s Vinyl Style Sample pack (free – available in the Musicradar’s website) includes few really awesome crackle samples. And I’m using one of them in this example – CRACKLE03.WAV to be exact.

All I need to do is to copy, paste & cut the crackle sample. It’s easy to loop it over and over again.

IMO the crackle sample needs a little bit of EQ. There’s some low frequency noise maybe a tad too much so I just assign it to a Mixer track and use Fruity Parametric EQ 2 to fix it.

And this was the end of method 2.

I’m sharing the .FLP files for both examples and the effect chain Mixer state file (.FST) so you can freely play around with them (note that they require FL Studio 11.0.2 or later, iZotope Vinyl, Milli Vinylli and/or the Musicradar’s Vinyl Style Sample pack to open properly):

Watch the video version below: